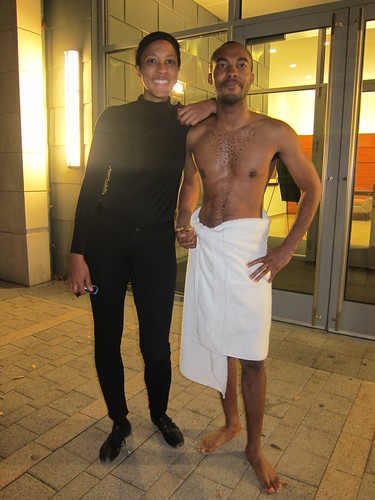 Of course there is a story behind this. I had no desire to be the Old Spice Guy; however, over the summer my roommate discovered the Old Spice Guy videos (He was only about 6 months late.) and had the bright idea that I should be him for Halloween. I think it’s funny so I tell Tiffany and Rochelle who also think it’s funny and demand that I do it…so I did. Fortunately, Rochelle hosted a party and only her friends had to endure this horrible sight…that is until we walked them outside after the party. We’re standing outside Rochelle’s apartment, saying goodbye and a random guy in an Escalade pulls up slowly, stops, and stares. I am so embarrassed! He lowers his window and says, “don’t be ashamed, you have four girls hanging out with you” and drives away.